Understanding Electricity Rates in Australia? Find Out How You Could Save on Monthly Energy

How to fight the rising cost of electricity rates in Australia

It’s no secret that the cost of electricity in Australia is increasing. Electricity costs are on the rise! In fact, it’s hard to get a straight answer as to what the average cost of residential electricity is. The ACCC’s recent inquiry into the price of electricity is a great tool to help consumers to find out how much electricity actually costs in Australia. As well as the vast differences in retailer rates, their report showed that electricity prices depend on where you live in the country, including which city and state, as well as what time of day you use your electricity.

Your quarterly electricity bill depends on the type of electricity plan you’re on, and the nature of the tariff (or pricing structure) that your plan falls under. On some plans, electricity is charged at both peak and off-peak rates. In Australia, electricity retailers often offer variations in their base cost per kilowatt hour. Off-peak rates are charged at less popular times of day, such as nighttime when electricity is less in demand, making them much cheaper. Peak rates are during the day and into the evening, when the majority of consumers use their power.

The average cost of electricity in Australia

The average cost of electricity in Australia has a number of variables, depending on the size of your home and how many appliances you use on a daily basis. However, the national average for electricity consumption in Australia is 6570 kWh per year or 18 kWh per day.

Unfortunately, in the past three years, household electricity bills have risen by over $500. According to the annual performance report from the Essential Service Commission of South Australia, South Australian consumers also pay up to $68 per year to fund green energy initiatives. This includes the giveaway of home energy saving devices, as well as funding for solar panels to generate electricity for the grid and for the promotion of alternative energy resources.

Fast-forward to today, and things aren’t much better. Australians are still paying too much for their electricity. In a comparison of advertised residential electricity prices, South Australia, Victoria, Queensland, and New South Wales all rated poorly when compared to European countries. 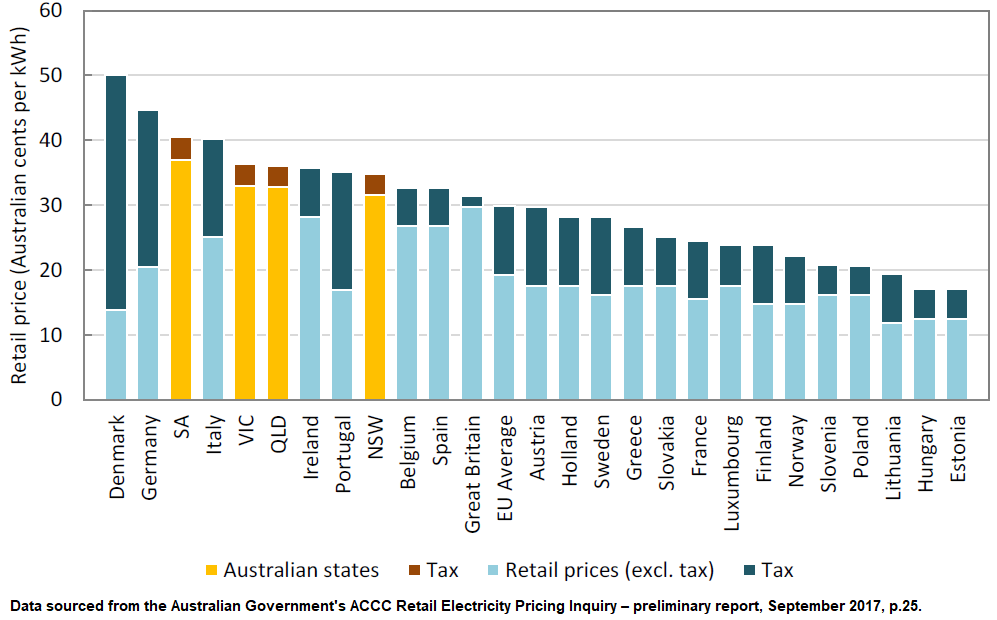 The Australian Energy Market Commission 2017 Electricity Price Trends Report states that the average annual electricity bill across Australia for the current year is up $100 from the previous year to $1576, with an average charge of 34.41 cents per kilowatt-hour – an average increase of 4 cents from the previous year. So across the board, the price of electricity is still increasing, and Government concessions still aren’t doing enough to help consumers fight rising utility costs.

In June 2018, the ACCC said that “competition in bidding among rival generators is critical for driving efficient prices.” The best way to ensure an overall drop in electricity prices is for consumers to shop around and get the best deal. Regularly comparing retail electricity rates, and shopping around for the best deal, will see an overall decrease in electricity prices. Using the online electricity comparison services of Electricity Wizard will help you get the best price as well as help to drive market prices down. Luckily, most regions in Australia are experiencing full retail competition, meaning that consumers are able to choose the electricity company they want to supply them with electricity. This puts the power in your hands and lets you reduce the cost of your electricity bill.

How to save on rising electricity costs

According to the Australian Government Department of Climate Change and Energy Efficiency, household water heaters are the single largest source of greenhouse gas emissions, and account for up to a quarter of the energy used per household.

The Australian government is creating a plan to phase out the use of inefficient hot water heaters altogether. This will create an emission savings of 51.1 million tons of greenhouse gases within 10 years and will save homeowners a significant sum of money on their monthly power bills as they conserve energy by using heating alternatives.

But if you don’t want to wait for the Government to step in, there are some simple, immediate steps you can take that won’t just help you reduce what you spend on electricity, but will help reduce your environmental footprint at the same time. And better yet, they won’t cost you a cent! We recommend you do the following:

Using these tips not only helps you to reduce your cost of electricity but also helps you give back to the environment too. So why not try them today—what have you got to lose?

Compare and you could save today!

If you really want to start saving money on your electricity bills, there’s something you can do right now to fight the rising cost of electricity. Get in touch with ElectricityWizard. We can help you compare your current electricity plan with a range of retailers to help you find a retailer with a plan and a rate that suits you, and helps you keep your hard-earned money where it belongs.

These days, homeowners have the freedom to compare electricity retailers and save even more money on their monthly power bill. Comparing providers will help you to get some of the most competitive electricity rates possible so you can enjoy massive savings on your home energy bill.

It’s no secret that the cost of electricity in Australia is on the up and up—but that’s where we come in. We’ll help you compare apples to apples, and find a plan that’s right for you. That is the way you can save on your electricity costs today!

It’s never been easier to compare energy providers than with ElectricityWizard. Call now on 1300 763 849 and speak to an energy specialist who will help you find a better deal to meet your needs.